We are unfortunately still waiting on a flying limo, but a flying pizza is very welcome!

Ok, so the pizza does not actually fly by itself, but a pizza flying drone is in the works.

Partners on project: Domino’s Pizza and AeroSight (drone Specialist Company based in London).

Location of project: Guildford, which is outside of London. 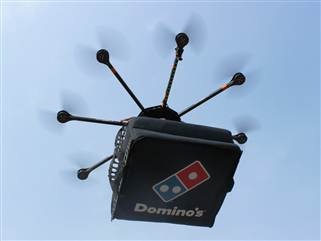 It is a small, lightweight flying machine with large claw like appendages to hold onto the insulated pizza box.

It was faster than the delivery driver, possibly because there was no reason to stop for lights along the way.

While the test flight of this ingenious piazza delivery is exciting, it is not likely to change the way we actually do receive our pizzas at this time. Dominos will continue to use delivery drivers and runners. There are some reasons why sending a pizza out in this way is a good idea. It would use less fuel, the delivery time is faster, and there is no carbon emissions released. One of the major problems with an undertaking such as this is the rules and regulations involving this type of aircraft. It is currently banned for commercial purposes (in most countries). This type of machine is normally used for aerial photography. There are regulations banning this type of thing in both the US and the UK. Even so there has been word of a DomiCopter flying school in the works.

This is not the first of this type of delivery:

A flying drone that was created by a team at Darwin Aerospace.

This flying food delivery device has a delivery drop that releases the burrito canister. It is connected to a small parachute. The device goes on autopilot with the recipient’s location or it can be flown manually with a camera. The burrito canister is literally dropped like a bomb. The creators do have hopes of being able to use this type of device for actual deliveries. Since the FAA Modernization and reform act has been passed there will be new regulations put into place by September of 2015 that directly relate to commercial use drones.